Yes. KP Astrology is the most accurate predictive astrology in the world.

Yes. KP Astrology is the most accurate predictive astrology in the world.

I first heard about KP Astrology in 2016 and decided to research into it. Within six months of research, I came to a conclusion that I must master the science of KP Astrology.

I learned KP Astrology under many gurus. I finally settled down with Prof. KSK Hariharan, son of Prof. K. S. Krishnamurti, the founder of KP Astrology. His teaching was clear. He had researched further about ruling planets and simplified it further for me to follow easily. I studied KP Astrology under him and eventually won the title Jyothish Bhaskara title from him. I collected 1000's of charts from people and wrote the world's largest rule book containing over 1600+ event rules from birth to death.

With KP System, How Uncover Secrets Of Your Life?

Do you want to uncover secrets of your life? Then you should try Kp system. Discover what kind of person you really are by using kp system. Get answers to questions like who am i?, why am i doing this?, where did i come from?, etc.

Learn how to use kp system to find out yourself better.

You want to know what kind of person you are so that you can make better decisions in life. Do you like yourself? What would happen if you were to die tomorrow? How will people remember you after you're dead? These questions may seem morbid, but they help you understand who you truly are.

The answers aren't always straightforward. Sometimes it's difficult to tell whether someone likes themselves because they think they look good or because they actually feel good inside. And sometimes we just don't know how others will remember us when we're no longer here.

Our KP system helps you uncover secrets from your past by asking you questions based on your personality traits. This gives you insights into your character and allows you to see where you stand compared to others.

No. KP Astrology is accurate. But, astrologers and their predictions can sometimes go wrong. I too have 5 to 10% inaccuracy in my predictions. I believe it is because of my lack of understanding in some areas.

What is more accurate between Vedic astrology and KP astrology?

KP Astrology is more accurate when compared to Vedic astrology. KP system is based on cuspal sub lord theory Cuspal sub lord changes even within a minute. Let us look at an example of twins.

Natal Chart of the Twin Elder Sister is shown below: 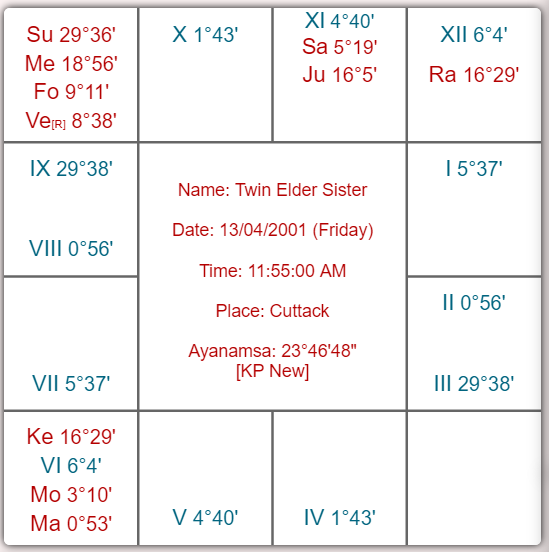 Natal Chart of the Twin Younger Sister is shown below: 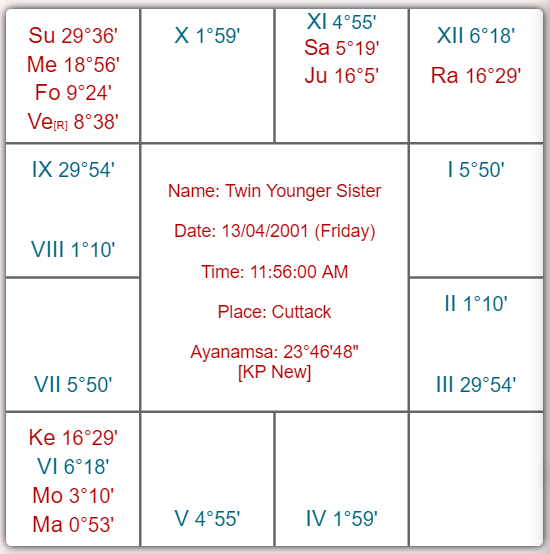 All planets remains in same houses, same rasis, same stars. If you go with traditional Hindu astrology, you will find no difference in their lives.

Now, let us see the houses chart for both. 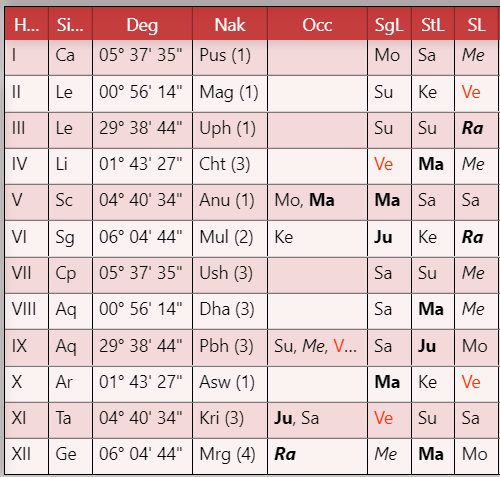 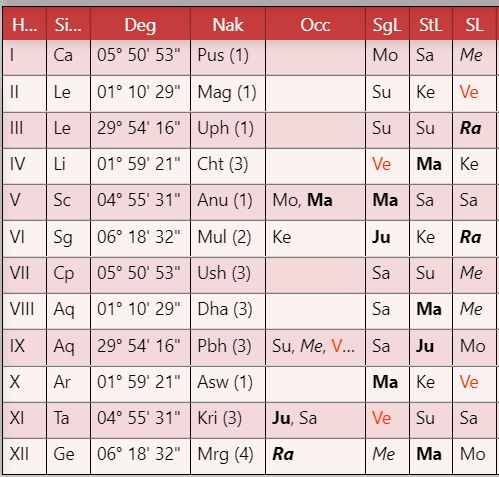 4th Cuspal Sub Lord for the elder sister is Mercury but for the younger sister, it is Ketu.

The elder sister will be very serious about learning process and will go deep into researching topics and memorising the lessons. She will go through certain difficulties related to fourth house, for example, in school education but the younger sister will be super successful.

Why KP chart is different?

For example, in the KP chart in the above example the planetary positions are precisely marked in the table below: 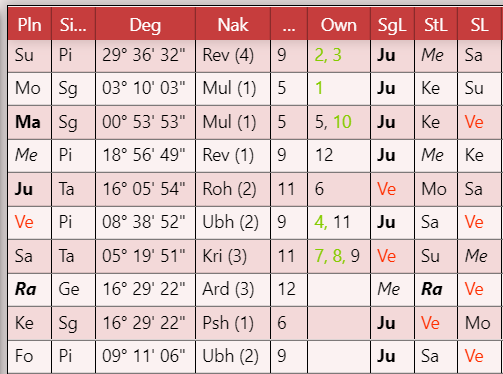 Mercury, the cuspal sub lord of the 4th Bhava is in star of Revati owned by Mercury in the Zodiac Pisces owned by Jupiter. Hence, Mercury will give the results of Mercury's deposition and ownership. Mercury is posited in the 9th house and owns 12th. Both are non-improving bhavas resulting in the elder sister taking her school education seriously. She will also be unsuccessful in real estate investments and owning houses and lands.

Let us see another example of how to predict your career accurately.

How can I predict my career in KP astrology accurately?

In this example of twins, both sisters will follow a similar professional career. Divine guidance of their 10th Bhava cuspal sub lord is Venus. Accuracy of predictions depend entirely on Venus.

Only KP system of astrology allows accurate and proper evaluation of the horoscopes.

The KP System of Astrology is more precise and accurate than the traditional methods and it helps uncover the future mysteries and opportunities in life.

These are some differences between Vedic astrology and KP astrology. At the point when you Learn Astrology, you can be more clear about these distinctions. 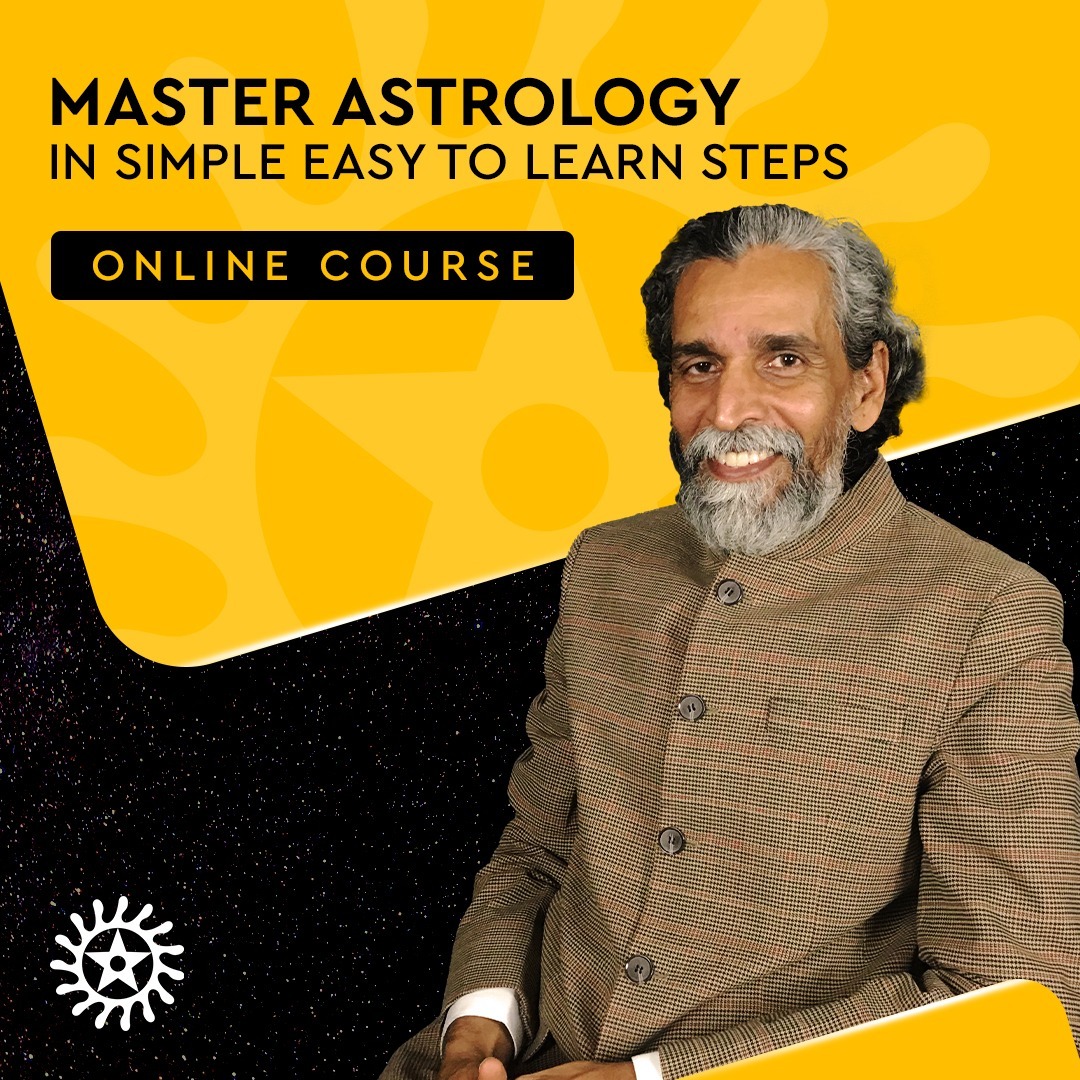